In marriage we acknowledge the bond of two people. When you study the cultural and religious symbols present during marriage rituals you will find that there a many similarities and parallels around the world. There are more things that unify than separate.

The House of Yes is inspired by universal marriage symbols found all over the world, celebrating not only the bond between two individuals but also the union of mankind.
The general typology op the chapel is that of an open box revealing a spiral formed lace ribbon. As this central spiral forms a beautiful mystical and ephemeral inner space, from the outside it can also be contemplated as a larger than life abstract wedding cake. During the ceremony the couple walks up seven revolutions of the spiral followed by the guests. As the couple arrives on top the whole gathering is naturally positioned for an unforgettable wedding picture.

As the couple walks down they are blessed by all the guests, once back in the chapel the actual wedding cakes is positioned at the heart of the chapel. The box shaped basis and the chapel offer a wonderful space for the marriage party to unfold. On warm days the facade completely opens to the surrounding nature.

Entering the core of the chapel one is struck by the beautiful spiraling movement of the building that is consequently pulled through the floor all the way to the very center: the most sacred place in the chapel where the official ceremony takes place. An elevator rises the couple to the top of the cake when the ceremony has declared their union.
There are many features and details that make this chapel unique and exciting:
The lace facade symbolizes connection and union. The pattern was generated using computer algorithms to mimic natural growth. Circles in the façade are left empty to add names of couple who have married and make the chapel a celebration of the union of people.

The chapel is surrounded by stairs, at the front side the stairs are partially covered by a waterfall. The sound and cool temperature of the water will convey a feeling of symbolic purification.
The outside stairs form an amphitheater that underlines the role of guests as witnesses as well as the public announcement of the marriage.

drag, zoom & enlarge to look around! 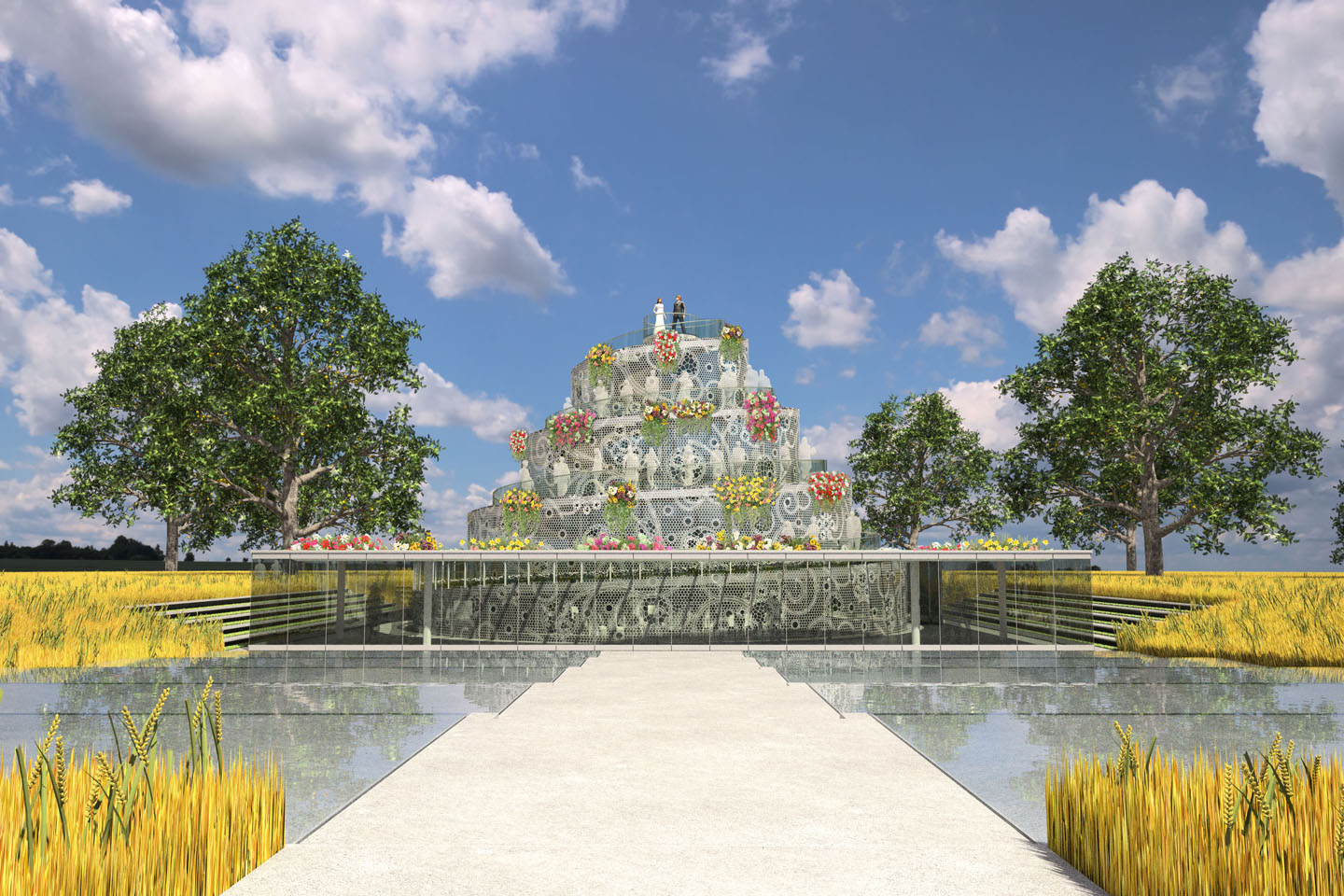 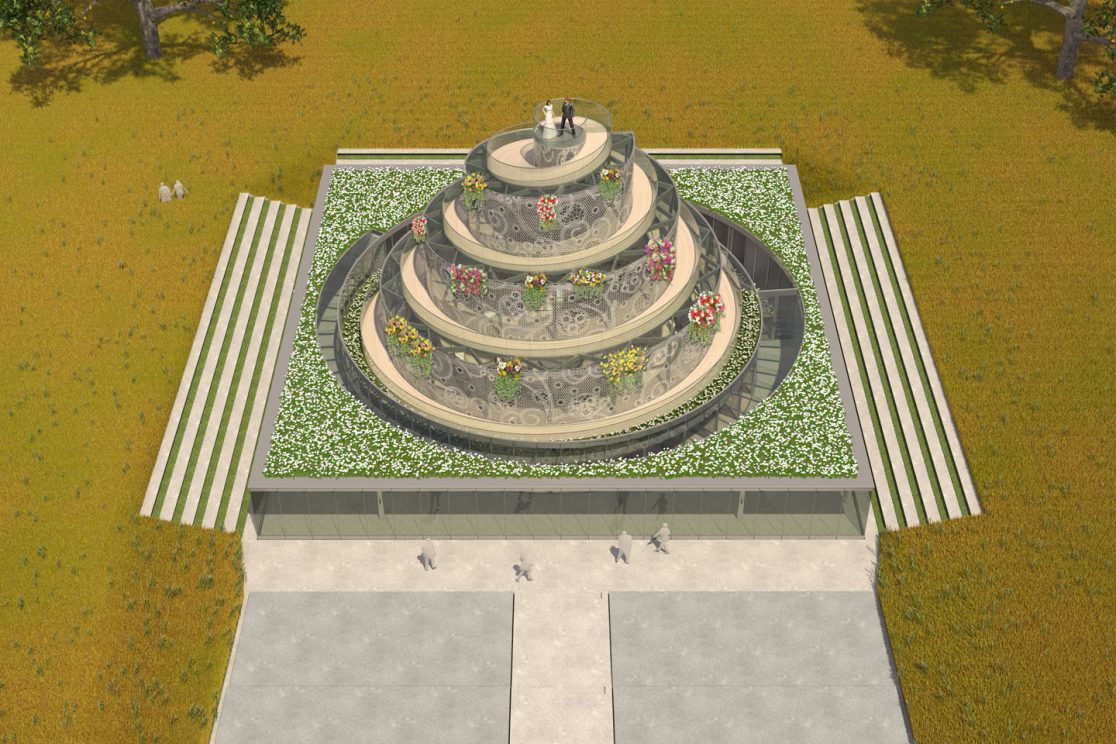 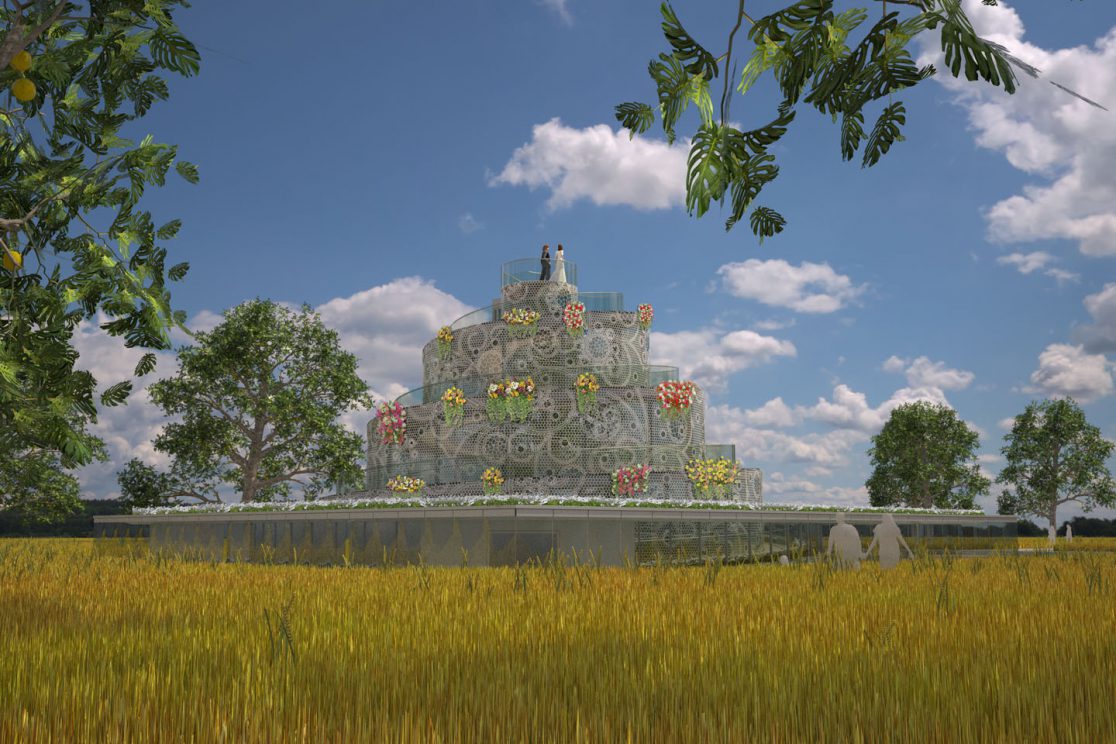 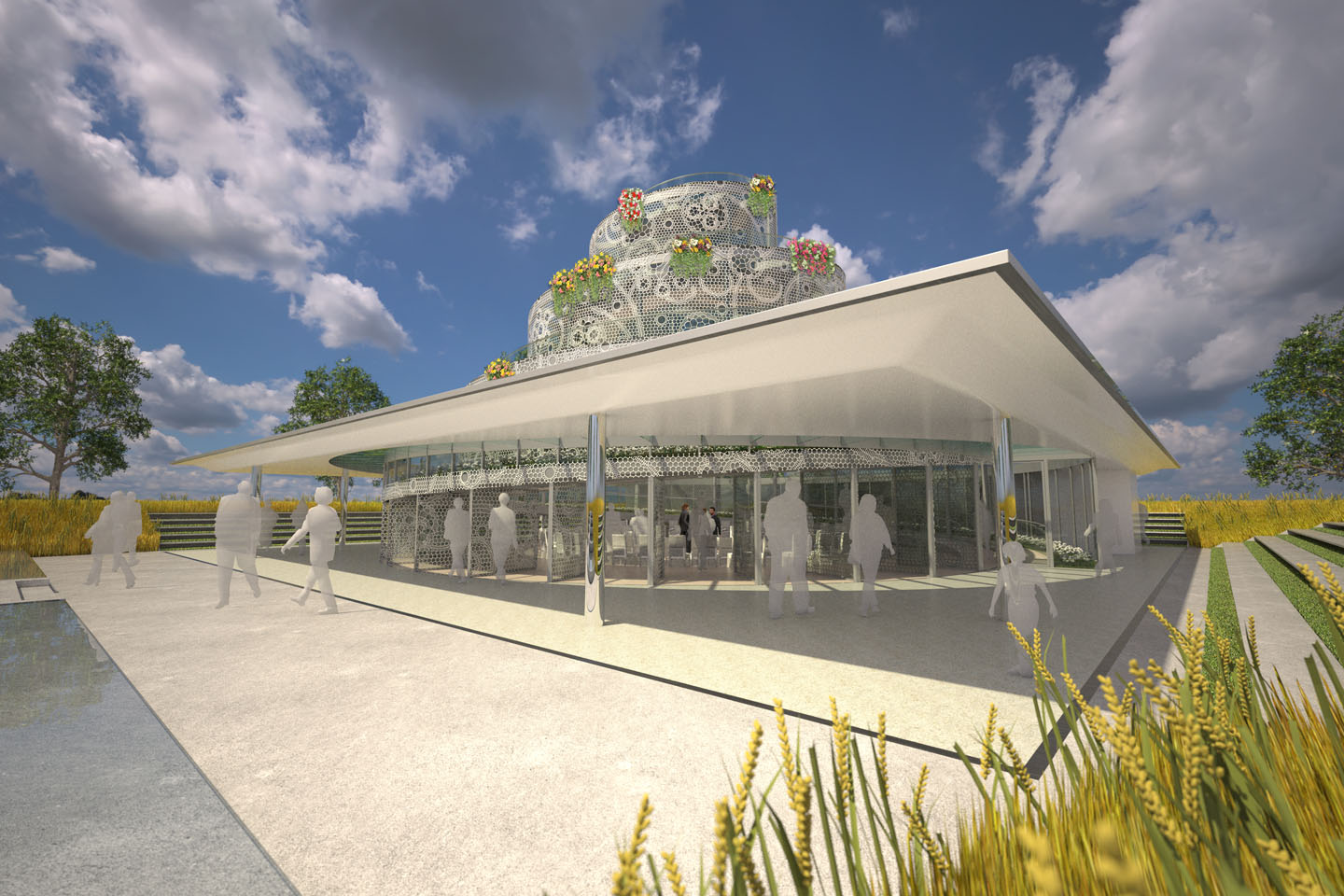 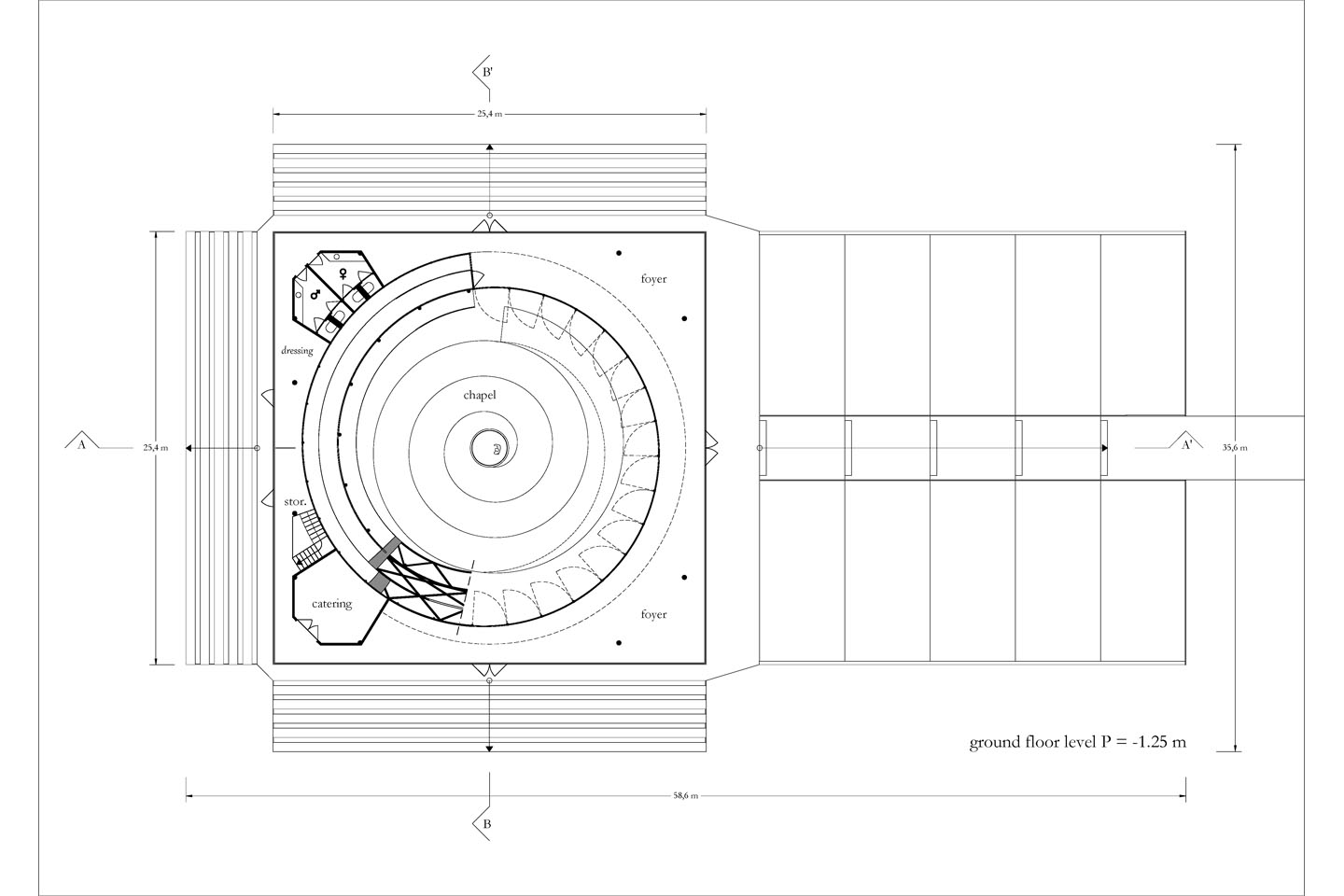 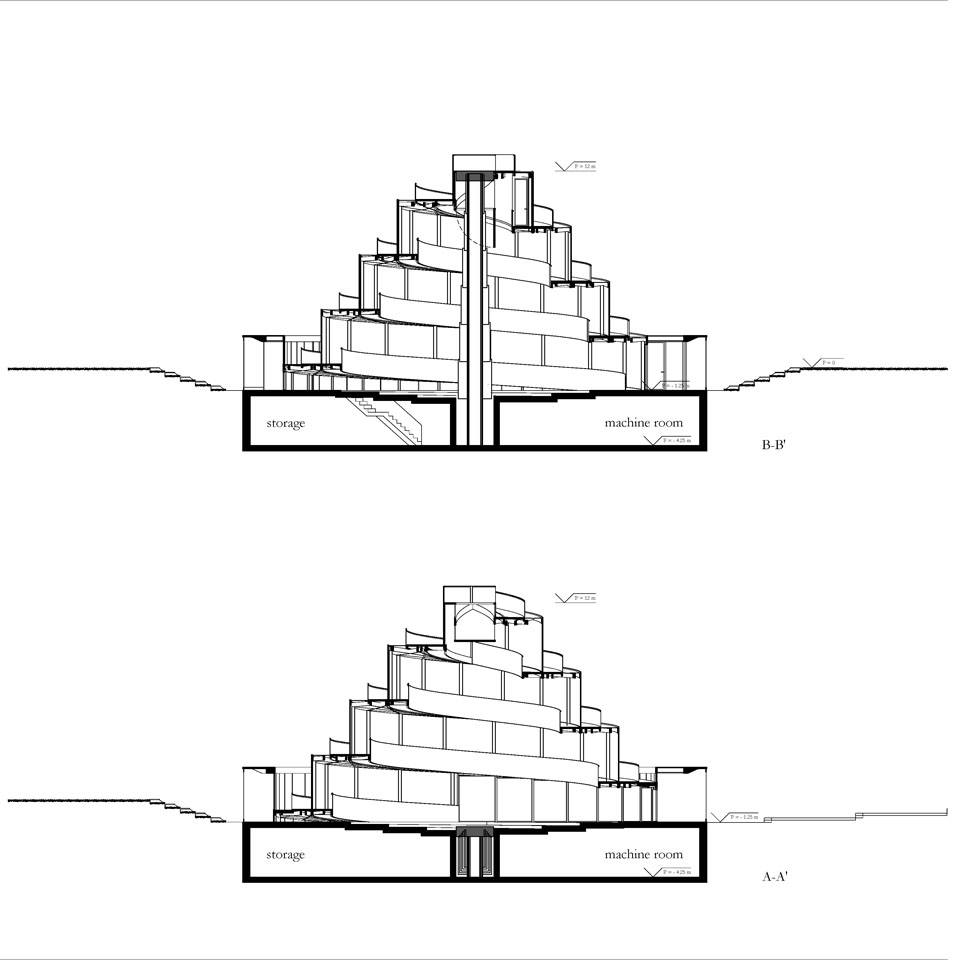 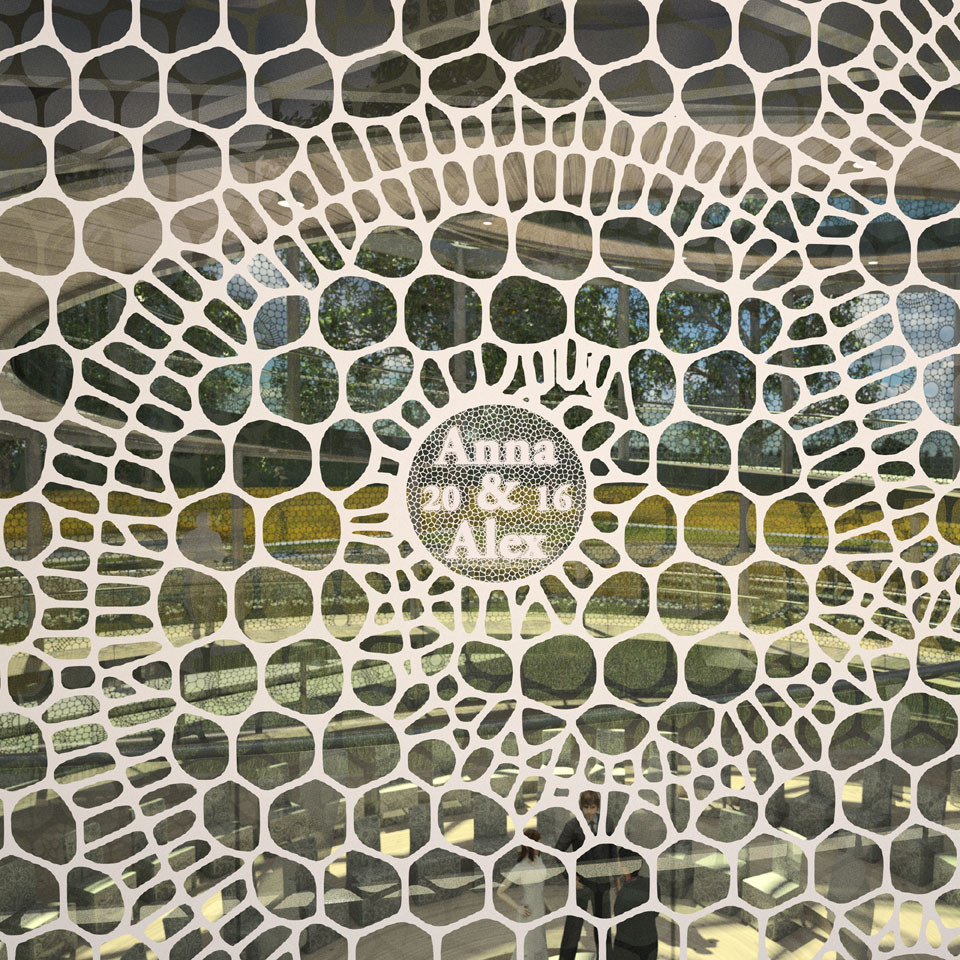 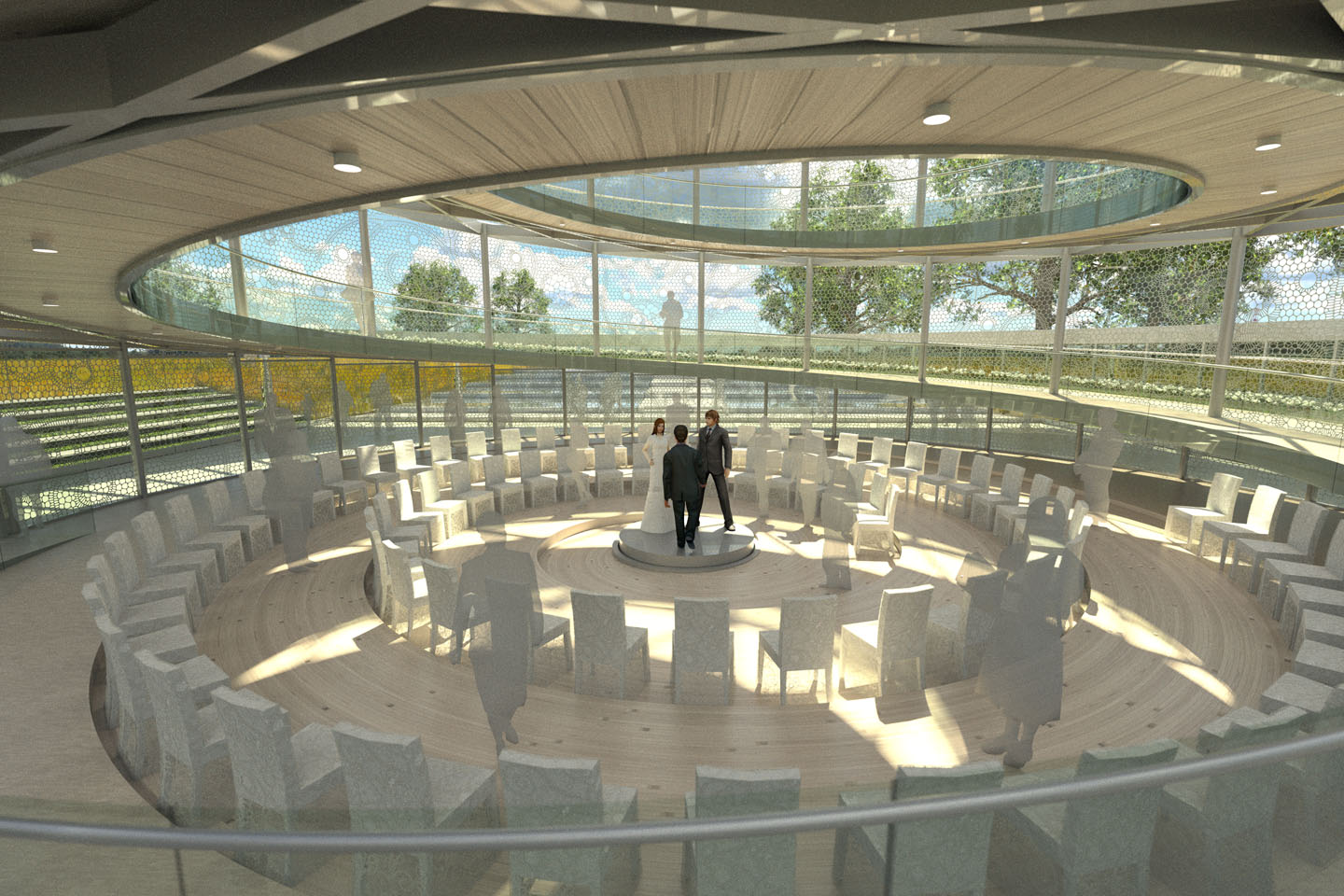 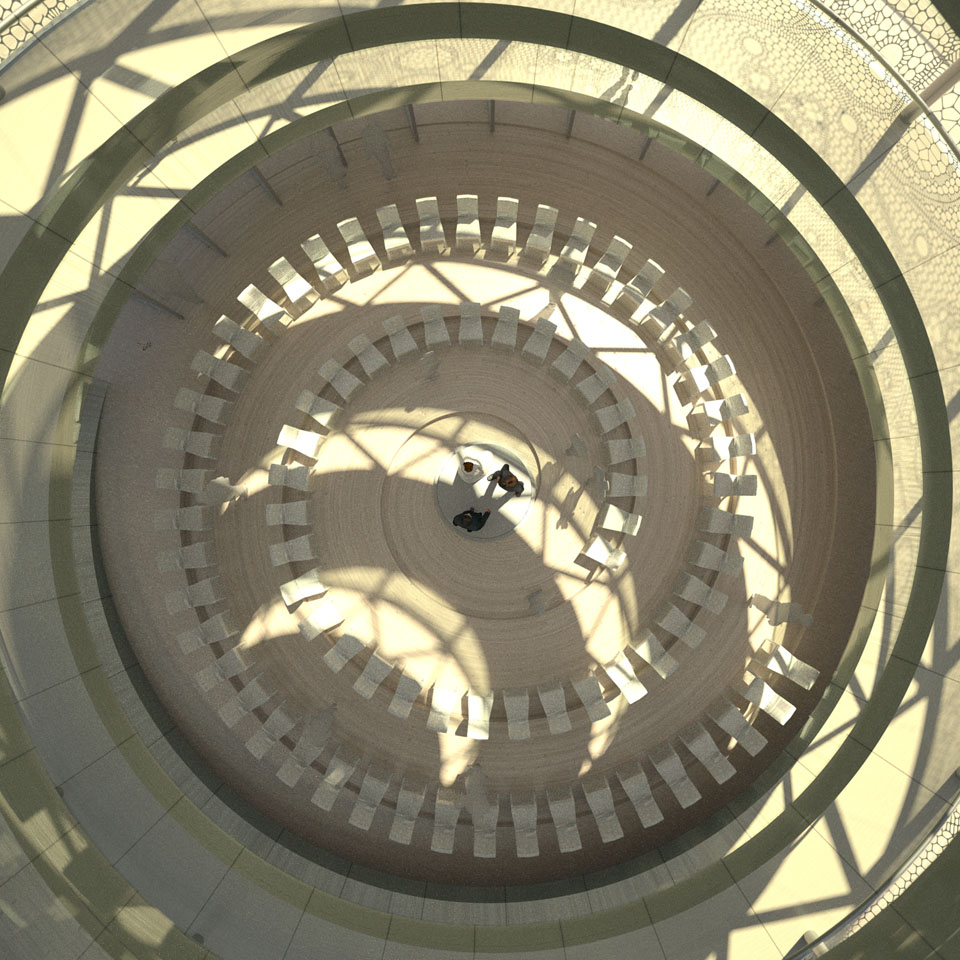 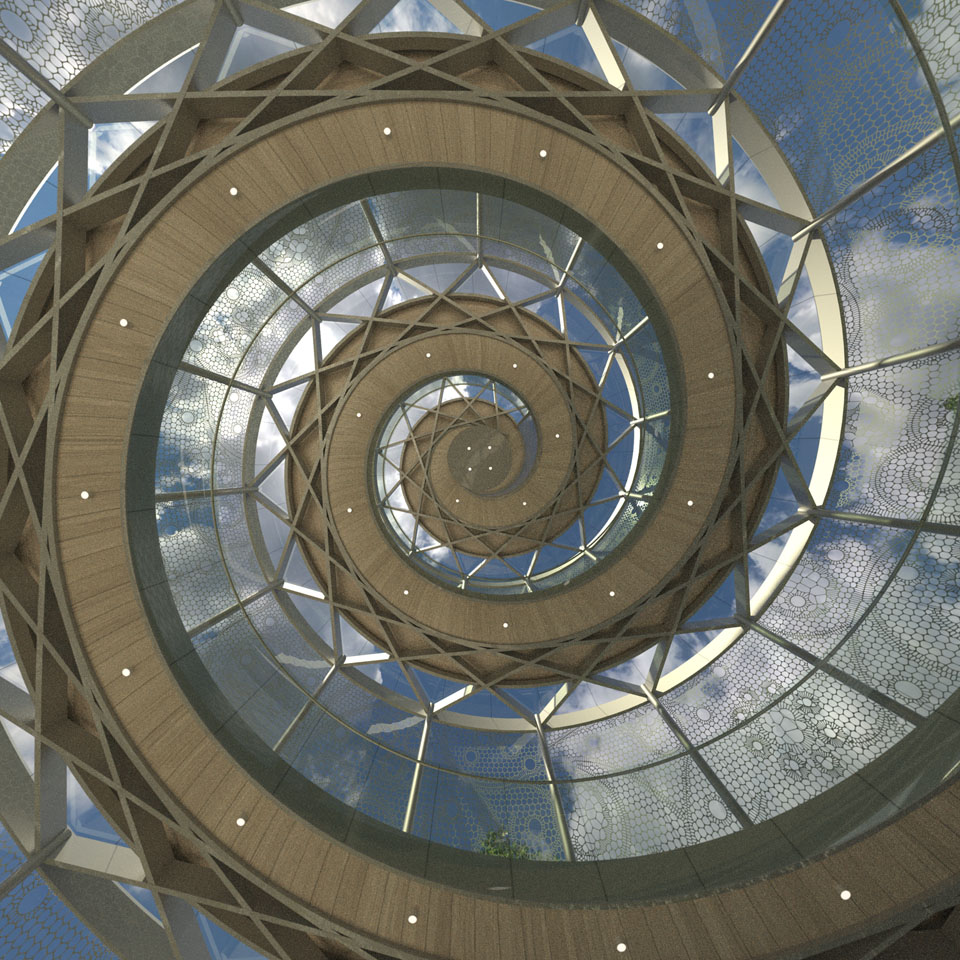 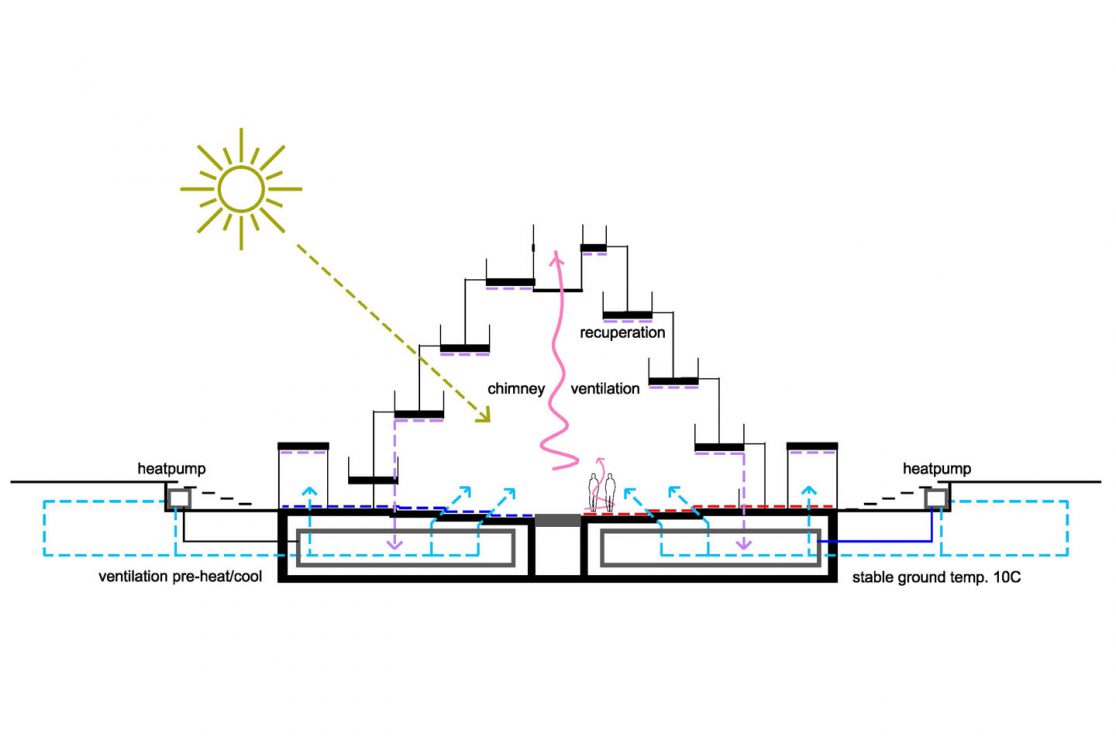 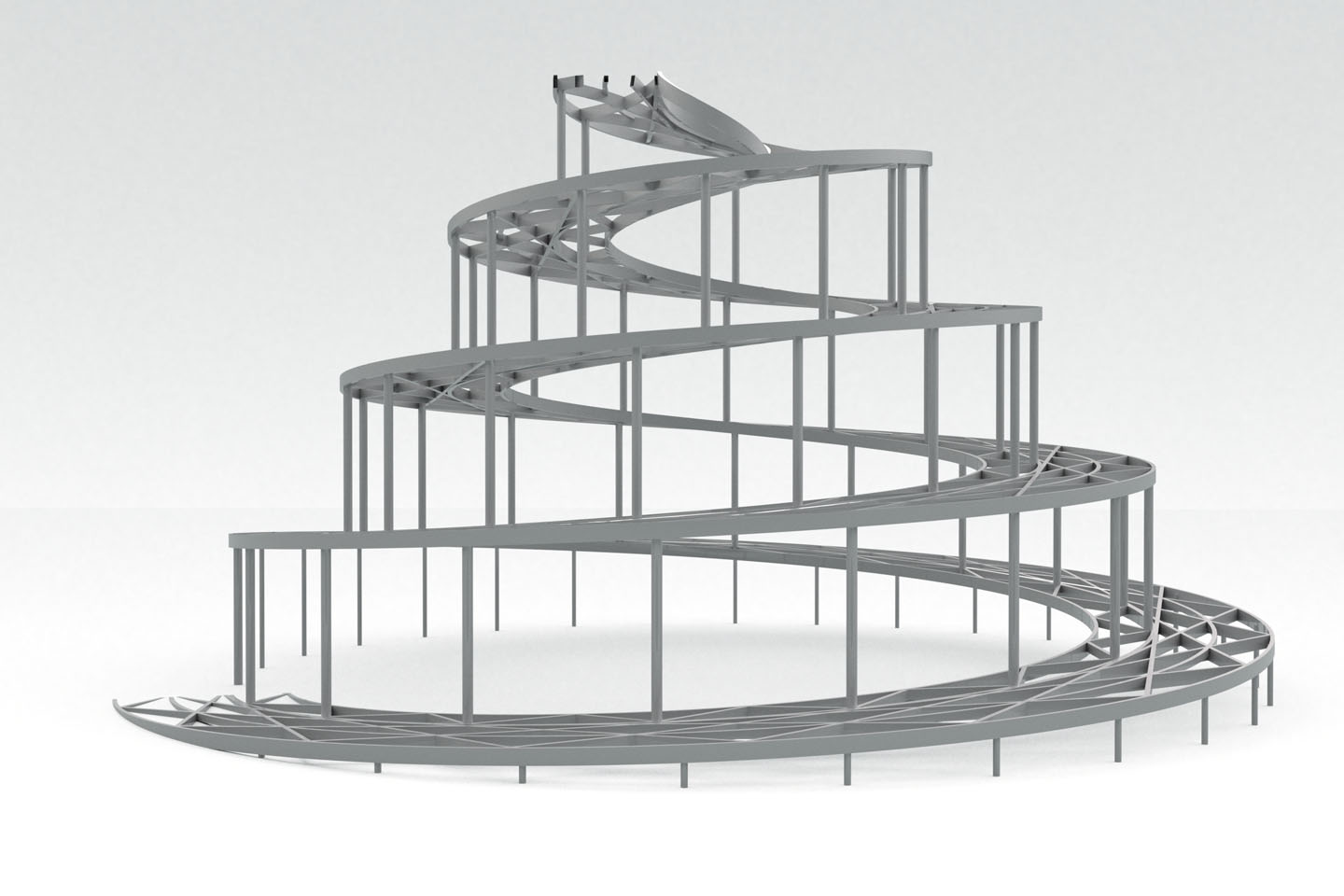 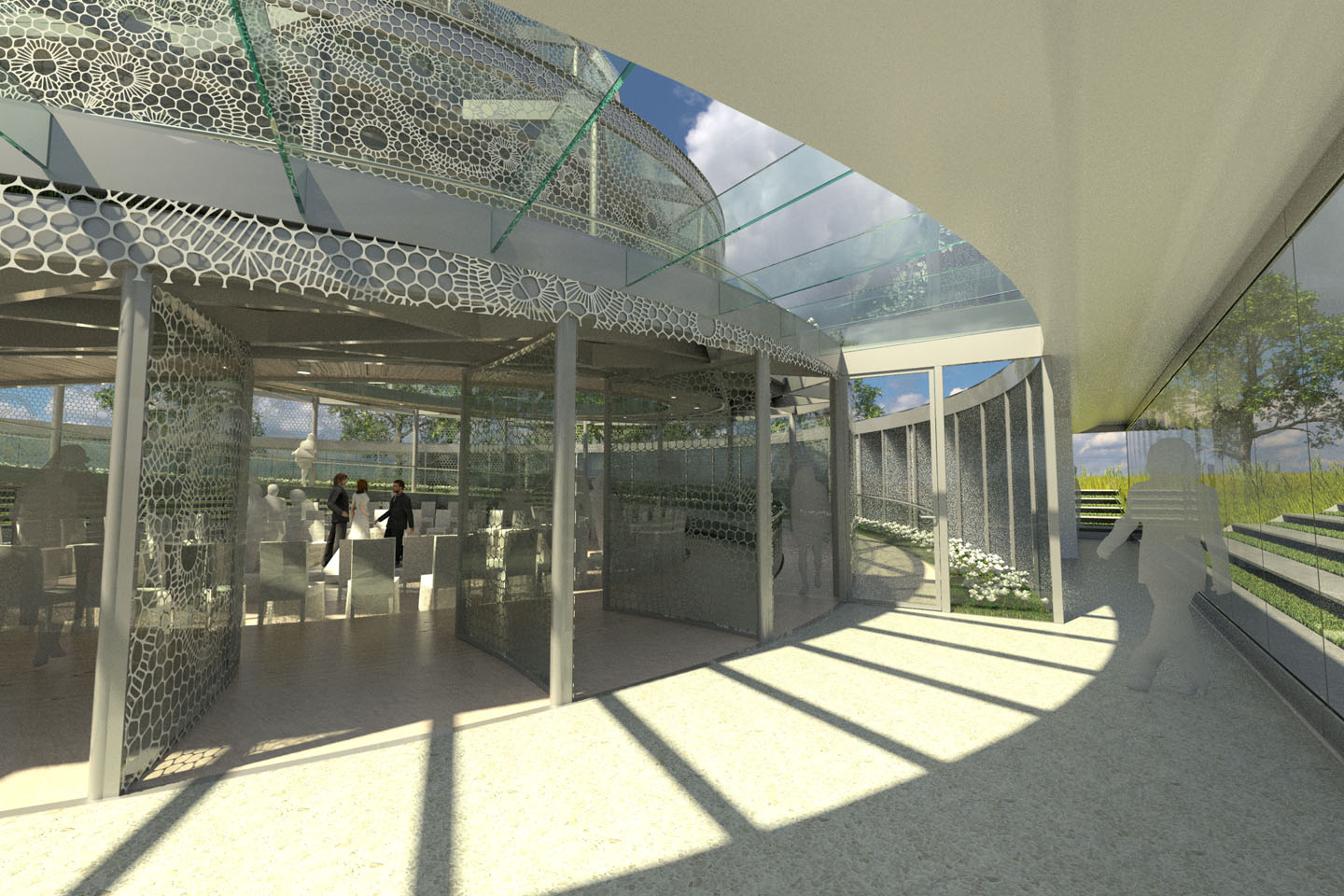